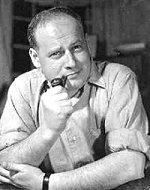 The Bricklayer's Lament.©
© Copyright Estate of the Late Gerard Hoffnung. All rights acknowledged.


Told by the late, great Gerard Hoffnung at the Oxford Union, December 4th, 1958.

A striking lesson in keeping the upper lip stiff is given in a number of the weekly bulletin of the Federation of Civil Engineering Contractors, which printed the following letter from a bricklayer in Golders Green to the firm for whom he works.

When I had fixed the building, there was a lot of bricks left over. I hoisted the barrel back up again and secured the line at the bottom, and then went up and filled the barrel with extra bricks. Then I went to the bottom and cast off the line.

Unfortunately the barrel of bricks was heavier than I was, and before I knew what was happening, the barrel started down, jerking me off the ground.

I decided to hang on, and halfway up I met the barrel coming down, and received a severe blow on the shoulder. 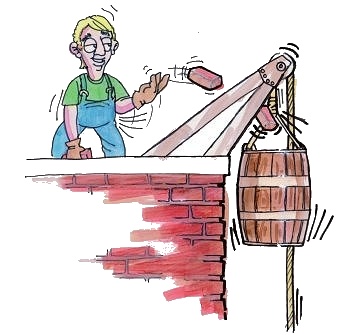 I then continued to the top, banging me 'ead against the beam and getting my fingers jammed in the pulley.

When the barrel hit the ground, it burst at its bottom, allowing all the bricks to spill out. I was now heavier than the barrel, and so started down again at high speed.

Halfway down I met the barrel coming up, and received servere injuries to my shins. When I hit the ground I landed on the bricks, getting several painful cuts from the sharp edges.

At this point I must have lost my presence of mind because I let go the line.

The barrel then came down, giving me another heavy blow on the head, and putting me in hospital.