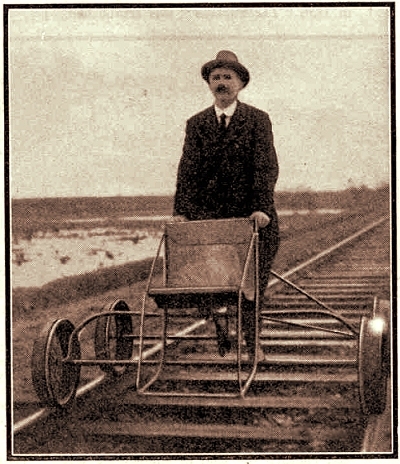 Much sadness in the Smith household today as we recall the untimely demise, exactly one hundred years ago, of my Great Uncle, the late (he usually was) Sir Stanely Barking. A fine engineer in the tradition of many a good Scotsman. Notably, celebrated inventor of the peddle powered, lightweight, ‘Rail-oCo-Pede’.

Sir Stanely's invention was designed with the intention of revolutionising and easing the arduous work schedules of track inspectors across Edwardian Britain’s vast rail network. A lightweight ‘quadricycle’ type machine mounted upon a frame to which were attached four flanged wheels. The wheels mounted at distance between flanges of 4’ 8½”, being standard railway gauge. Dubbed the ‘Rail-oCo-Pede’ Sir Stanely’s machine was stoutly constructed from finest quality British made Raleigh bicycle tubing and although quite heavy by today’s standards for any device intended for man powered propulsion at five hundredweight, Sir Stanely claimed he could maintain a steady 10 mph on it. In a following wind. Unfortunately for Sir Stanely the far stouter, 325 ton express mail train could maintain a steady 60 mph on its nightly run up from London King’s Cross to Edinburgh Waverley.

Sir Stanely entered the southern portal of Great Northern Railway’s South Mimms tunnel at around 9:00 pm on his '0-4-0' Rail-oCo-Pede and with nothing very much in his head at all. The express train, hauled by a GNR Atlantic class 4-4-2 steam locomotive and travelling with a full head of steam at around 60 mph entered the tunnel from the same direction around ten seconds later. 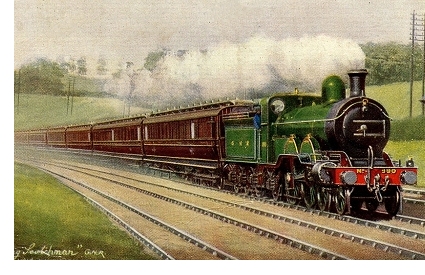 The inquest into this unfortunate accident was held, quite poignantly, in the Smoke Rooms of the nearby ‘Flying Scotsman’ public house. The inquest concluded that even had Sir Stanely Barking heard the train approaching from behind him it was unlikely he could have accelerated his mount up to a velocity in excess of 60 mph. Let alone maintain it for a sufficiently long duration in order to reach the tunnel’s northern end in time to make hasty and safe egress.

The driver, when questioned said “I nevvu even saw ‘im guv. An’ even if oi did it would a bin pointless applying the brakes. Oi takes three quarters of a mile to bring ‘er to a complete ‘alt. Don’t ya know?”

The inquest returned a verdict of death by misadventure with a codicil describing ‘gross stupidity’ on the part of my Great Uncle. A sad blemish upon an otherwise glittering career as railway engineer designing all the bits and bobs the general public don’t usually notice but which do important things like holding the wheels on. 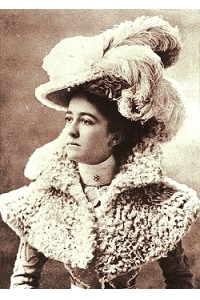 Sir Stanely Barking’s widow, Lady Cotter-Pinmissin, who for reasons of her mother and siblings insisting she retained her maiden name, was unable to make funeral arrangements for some days afterwards. Until all of her late husband's remains had been recovered and which of course they all were; eventually. Well most of them. From the track side at Stevenage. And at Peterborough, Grantham, Newark and a little bit more at York, where the night express generally stopped for its sole thirty minute ‘Refreshment Break’ before continuing its otherwise non-stop journey to Edinburgh.

Shortly after this sad incident the Great Northern Railway Company Ltd decided to abandon plans for purchase of a fleet of one hundred Rail-oCo-Pedes with which to furnish their team of track, cutting, embankment, tunnel and bridge inspectors. Quite sensibly they continued their essential work thereafter on foot.

A sobering thought for me is that had the majority of my ancestors not continuously met untimely ends through often foolhardy acts of either bravery or misadventure I might be much richer than I now am!

For the day anyway.