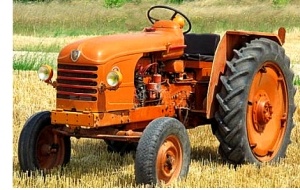 Another true story. I've hesitated to write it before. Firstly to protect the guilty and secondly to avoid accusations of pervert! I am though a man. A red blooded one at that so I think I can be excused. The guilty have anyway since upped sticks and left these parts. No one is likely to realise who I am talking about and even if they did, frankly the parties involved should be flattered (though perhaps a little embarrassed!).

Amongst my various toys, as Memsahib describes them, I have a little tractor with a hydraulic hoe or back-actor (sit down Elton, it isnt for you!) attached. Its for digging holes in the ground. Its about as small as practically viable and thus far too slow for a serious tradesman but it does the job. Eventually. Its also terrific fun to operate. Especially if your normal job means being stuck behind a desk all day. A sort of grown up Dinky toy.

I will not work on the black as it is known and indeed quite common in France. I dont think its right and anyway have too noticeable a profile amongst our community to get away with trying to do so even if I wanted to. I will though help out friends. Providing that by doing so Im not taking work away from any deserving artisan (tradesman). A small problem arose when my dear neighbour and good friend insisted on finding lots of people in the village that required holes. Or other jobs such as uprooting errant elder bushes and such like. Hardly work that would be of any interest to someone running an excavator or digger such as a JCB.

One day my neighbour (who shall remain nameless for fear of embarrassing Jean-Louis. Dammit! Now Ive said it!) called round with a bag of carrots and a sheepish grin. I have a friend who wants some soil shifting. Said Jean-Louis (except in French of course.)

Well my machine isnt best suited to that sort of work. I protested. 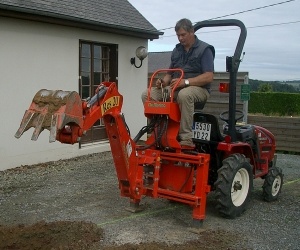 I appreciated that Jean-Louis might not best understand but back-actors (sit down Elton, it isnt for you!) are for excavating soil below the ground theyre standing on. They arent good at moving stuff above the height of their axles. The job described involved moving a former rockery, all of it above normal ground height.

Ill see what I can do. Please though, I know you mean well but try not to keep finding work for Daisy (all tractors have names. Dont you know anything?!). People are beginning to talk.

Daisy and I set off. We met the owners of the property and agreed a plan of action. Space was tight. Definitely not a job for anything much larger than Daisy, my diminutive machine. Anything smaller is called a shovel!

I set to work. The owner had provided a much larger tractor and trailer with which to cart away the spoil. An ancient Renault and an even more ancient tipping trailer. The problem I faced was that the confined space and the height of the old trailer conspired to prevent me from emptying the digger bucket into the trailer.

Ive got a load box at home. Ill go back and fetch it. I suggested.

A load box fits onto the standard three point linkage at the back of all tractors. For attaching additional implements and devilishly ingenious machinery. Although not capable of carrying much of a load compared to a wheeled trailer it does have the advantage that its base, or platform, can be lowered completely to ground level. Thus making it easier for emptying digger buckets of soil into.

No need. Said my friend. Ive got one too. Ill drop the trailer off and pick up my load box instead.

Ten minutes later he was back. The load box had even less paint still attached than his old trailer but it looked serviceable enough and thus it was.

A problem transpired however when trying to lift even a half full load box off the ground. His tractor had no counter balance weights fitted to the front. In fact the tractor was so ancient the designers hadnt even thought to provide any rails upon which to fit any in the first place.

With the front wheels off the ground as soon as the half loaded load box at the back was lifted, and with either inefficient or more likely, non existent independent brakes on the back axle with which to steer by, it was impossible to manoeuvre the tractor.

Clearly though he had faced the problem before and had developed an expedient if novel solution. UK 'Health & Safety' Executive would have had collective apoplexy. My friend marched into his bungalow and returned twenty seconds later with his not unenthusiastic and quite attractive young wife. No more than five words of explanation and she hitched up her already short frock and climbed up onto the front of the ancient, throbbing old Renault. Whereupon she flung her body over the bonnet, grabbing each side of the rear of it in the process. Then (I am NOT making this up! OK? I couldnt have imagined it even if I'd tried!) she spread her thighs as wide as they would go before bringing her legs back to firmly clamp one either side of the front of the bonnet. Her husband, with the benefit of his tractors front wheels now brought back into contact with the ground, was thus able to reverse away from the work area. Reversing past me and continuing on, slowly, in reverse, wife spread eagled over the bonnet, all the way down the lane stretching out in front of me. Slowly (I may have mentioned that already!).

If anyone requires more explanation or a diagram then sorry, but I am not going to provide either. Just work it out for yourself.

Trying to fill the load box more than halfway was useless. The sweet, poor woman was quite tiny and her weight barely sufficient to bring the front wheels of the old Renault back into contact with the ground as it was. Progress was thus very slow that day. Although no one else appeared to notice I thought it was quite a warm day too. So warm my spectacles kept misting up. Dammit!

For the day anyway.